Already, the impact is being felt.

“Today’s 0.75 percent rate hike by the Federal Reserve is sending a shockwave through the real estate capital markets. Several bridge and construction lenders have already communicated a halt in lending for the foreseeable future,” said Jack Carroll, a managing director at Los Angeles-based advisory Tauro Capital Advisors. “However, not all capital sources are out of the market. We expect many capital sources to update their lending parameters and strategies. Aside from raising fresh capital, existing loans will be impacted as well.”

While the market had largely expected and booked in a 50-basis point increase, the Fed changed tack after seeing higher-than-expected inflation numbers in May. The rate hike, the largest single increase since 1994, means the Federal Funds Rate is now in a target range of 1.5-1.75 percent.

While the financial markets were already pricing in the 75-basis point hike prior to the announcement, the change is meaningful, according to Chris Moore, managing director of hedging and capital markets at advisory Chatham Financial. “This change is being driven by the higher-than-expected CPI data for May released this past Friday,” he added.

The impact will be felt on floating-rate indices, like SOFR and LIBOR, which tend to closely follow the Federal Funds rate. “These anticipated hikes from the Fed will increase borrowing costs on floating-rate loans,” Moore said. “The market is expecting SOFR to hit around 4.00 percent by March of 2023. If this comes to pass, that will represent a whopping 4 percent increase in the base rate for floating-rate commercial real estate loans in a roughly one-year period.”

“In the past couple of months, we saw many floating-rate lenders requiring little to no interest rate protection in the form of interest rate caps,” Carroll said. “This means a lot of borrowers are going to feel this interest rate increase. Further, an increase in borrowing costs could trigger debt covenants, so it is imperative that borrowers understand those risks.”

Another impact will be felt in transaction activity, which already slowed sharply in April as MSCI Real Assets tracked a 16 percent month-on-month decline in deal volume. The drop in activity could presage a broader cap on the rally seen in the commercial real estate market over the past year, where transactions have been surging as the US has started to emerge from the covid-19 pandemic.

With additional reporting by Randy Plavajka and Anna-Marie Beal. 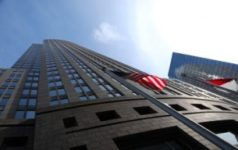