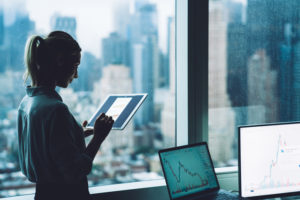 Rob Gilman, partner and co-leader of Anchin’s real estate group, told Real Estate Capital USA that filling commercial office space has been a continual struggle in the first quarter of 2022 because people are still not back in offices. Additionally, tenants are requiring less square footage and signing leases at lower rates.

With debt now coming due that had previously been put off from the start of the covid-19 pandemic, Gilman said borrowers are finding the amount of loan proceeds senior lenders are offering has decreased significantly, forcing office owners to get creative to fill the gap. For Class B or Class C buildings specifically, Gilman said lenders are also concerned about valuations.

“With rents coming down, tenants moving out or tenants taking less space, it’s become an issue in the market for landlords looking to refinance their mortgages,” Gilman said.

Where proceeds from senior lenders are down, mezzanine lending opportunities are arising.

The Chicago-based manager is primarily steering toward multifamily investments in its next mezzanine fund structure, Mezzanine Realty Partners V, but may also look at office opportunities in growth employment markets.

“We’re going to avoid the large capitalization, urban, heavy mass transit markets for a little while to sort out where companies decide they want their occupancy requirements to be with folks either coming back to the office or on flexible work schedules,” Lyons said. “To the extent we are looking at office, it’s going to be in growth Sunbelt markets like Nashville and Charlotte and some of the Texas markets.”

Gilman said filling office space can now boil down to giving more build-out allowances, free rent allotments and amenities. He noted one way landlords are trying to drive up occupancy in the tenant-driven environment is to provide the requested add-ons while charging more for rent per square foot to compensate.

“Landlords are hoping the valuations are based on what the rents per square foot are going for, so if there are vacancies they can maintain their model,” Gilman said. He noted landlords are constructing more deals in this fashion to get a higher valuation, particularly for potential refinance situations.

The ongoing struggle to keep offices at sufficient occupancy to maintain profit margins and debt pay-off schedules has forced more landlords to go back to lenders to refinance amid the turbulence. Compared to the start of the covid pandemic, landlords are in some cases having to now put money back into a deal.

In Gilman’s experience, some building owners have had to sell pieces of their deals to bring in new equity and in select cases have had to buy out old equity at lower valuations to field new money altogether.

“Although I believe things are starting to change for the better in the real estate industry, I’m not so sure how many employees will be back on a full-time basis in three to six months and then the question is: what is the new world going to be?” Gilman said. He noted that many industries that Anchin works with are favoring remote working arrangements and tenants can now get a better deal compared to prior years when building owners commanded negotiations.

For lenders active in the office sector, Gilman said personal guarantees could come back into the mainstream to keep borrowers on the hook amid any refinancing turbulence. “’I’ve seen it come up a little bit, and I would not be surprised if that’s going to be a big thing,” he said.

Uncertainty for the future of the US office sector has also opened opportunities to debt funds looking to wade in varying levels of risk that more senior lenders may shy away from. Gilman said the loan-to-own play – while more popular in years past – is still on radars for debt funds looking to capitalize on the sector’s return to form while shielding for any defaults that could happen.