“A year ago, you wouldn’t be able to finance C-PACE projects in New York, Chicago, Philadelphia or Boston,” Bailey says. “This year, the markets in which we can use C-PACE have dramatically expanded.”

Here are five things borrowers and lenders should know about C-PACE financing.

Unlike traditional loans, C-PACE financings are paid back at the same time as a borrower’s property taxes, and the loan is attached to the building even after it is sold. The financings are often used for energy efficient retrofits and renovations. C-PACE loans are at the top of the capital stack, further incentivizing owners to prioritize ESG financing. 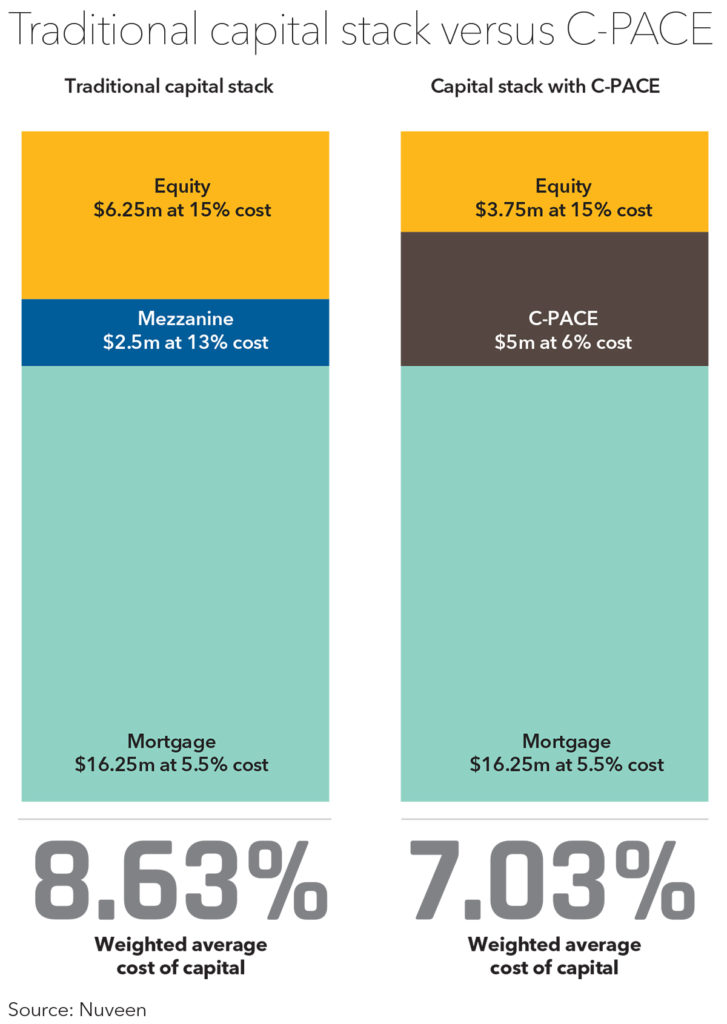 “The way C-PACE is structured is that the amount that’s currently due on a C-PACE assessment is senior to any other debt on the property, similar to any other property tax,” says Bailey. “We’ve gotten more than 300 senior lenders – from the smallest community banks to the largest institutional investors – comfortable with C-PACE and that’s been a big piece of the growth.”

“It dramatically brought down the cost of capital, allowing C-PACE to be a much more competitive financing option for an owner or developer. One of the priorities that we had was to make sure we maintain the most attractive cost of capital; the 144A allowed us to do that,” Bailey says.

3. C-PACE can be applied retroactively

Building owners can use C-PACE financing to pay for past retrofits and renovations that qualify as ESG upgrades. Nuveen Green Capital is providing retroactive C-PACE financing for work done as far back as three years ago. So far, owners have been eager to use C-PACE to make previous upgrades more affordable.

“There has been a real move from rhetoric to action among large institutional owners of real estate, where they are starting to actually put money where their mouth is”

“We’ve seen a lot of growth in this industry from owners who are realizing that they’d be well served to replace whatever more expensive source of financing that they had used for these upgrades with C-PACE,” says Bailey.

C-PACE functions as passive long-term capital for real estate developers, with less stringent covenants than other sources of financing – most owners are happy to recapitalize upgrades which they may have initially paid for out of pocket with C-PACE, according to Bailey.

“Because of the fixed-interest rate and long duration of C-PACE, it’s a super creative way for an owner to make sure that they’re amortizing their loan over the life of equipment that’s saving them energy,” she adds.

4. C-PACE is not a federal program

While C-PACE is a program adopted across the country, it is not a federal program and is subject to specific state and local guidelines. There are now 36 states that allow C-PACE financing.

“The lack of centralized federal standards makes each loan application process especially unique and requires hands-on expertise. We had to build out a team of specialists who understand the nuances of different markets.”

5. What it means for ESG going forward

Bailey sees Nuveen Green Capital’s implementation of C-PACE as a pivotal step in the financing of real estate ESG. And interest in green lending has increased enormously in the last year.

“I think in the last 12 months or so there has been a real move from rhetoric to action among large institutional owners of real estate where they are starting to actually put money where their mouth is and trying to figure out exactly how they are going to finance the sustainability move of their real estate portfolios,” says Bailey. n