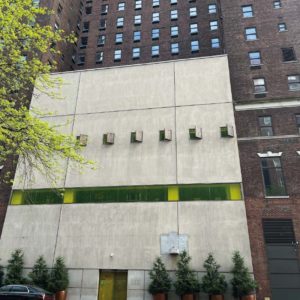 New York’s Hudson Hotel, built by Anne Morgan as a clubhouse and residence for women in the city nearly a hundred years ago, is preparing for its next act – a mixed-use multifamily property.

The property at 353-366 West 58th Street, a stone’s throw from both Central Park and Billionaire’s Row on 57th Street, seems like it was made for a luxury residential conversion, says Paul Rahimian, chief executive officer of Parkview Financial, which funded the $207 million loan to acquire and redevelop the property. Existing amenities include a grand lobby, outdoor space, and even a swimming pool – a rarity for a New York apartment building.

Rahimian estimates the conversion will take about eight to 12 months and in many ways will be one of the easier parts of the deal, given the existing set up of the property’s roughly 850 hotel rooms. “One of the big differences with this deal is the time frame. If this was a brand-new, 400-unit building, it would probably take two or three years,” Rahimian tells Real Estate Capital USA. “This conversion will take less than a year.”

Negotiating the deal was complex, with Rahimian noting the transaction includes a ground lease. “It was a fairly complex deal, but luckily, all of the parties worked together really well,” he said. “The sponsor has done this before with other older hotels in other cities.”

The rooms will be converted into 438 studio or one-bedroom units, which will have hardwood floors, stainless steel appliances and in-unit washer dryers. With a unit size that is smaller than similar-quality properties, the sponsor will gear the project towards young professionals and students, with the aim of offering rents that are about 20 percent below other properties in the immediate area.

Anne Morgan, the daughter of JP Morgan, develops the property as the American Women’s Association, a residence for young women

Greenwich, Connecticut-based Eldridge acquires the property, which closes its doors amid the covid-19 pandemic

An undisclosed partnership acquires the asset, with plans to complete a residential conversion