Real Estate Capital caught up with Vetter to discuss DekaBank’s lending goals, plans to grow its loan book and challenges in the bank’s core markets.

Real Estate Capital: What is your objective for DekaBank’s real estate loan book?

Sebastian Vetter: We have a moderate growth objective, with the aim to grow our loan book to around €10 billion by the end of the year, which is about €1 billion up from last year. Our target for new business is €3.5 billion per year, which compares to €2.9 billion last year. We expect to keep the same volume for new lending over the next couple of years.

REC: How is DekaBank planning to grow its loan book despite margins being under pressure in key European markets?

SV: Our two biggest markets are the UK and North America, which offer us the possibility to diversify from European markets experiencing pressure on loan margins such as Germany or France, where margins for senior debt against core assets are below 100 basis points. This compares with margins of around 140-150bps in the US and 155bps in the UK. Based on these price dynamics, we are targeting new lending volumes in the US and Canada of around €950 million for this year, and €900 million in the UK. By contrast, our goal for annual new originations in France is €500 million and in Germany, around €150-€200 million.

REC: What is your view on the UK and how are you approaching financings in this market amid Brexit?

SV: The UK is such a prominent investment destination, despite possible struggles that could be caused by Brexit. We are confident that the assets we finance – landmark buildings with long leases and moderate leverage – will be resilient, despite some bumps on the road in the short term. If you provide a five-to-seven-year loan, then you shouldn’t see an impact on the asset’s cashflows. A temporary drop in values would increase leverage but this wouldn’t hurt us too much as our average loan-to-value is 50-55 percent in the UK. Also, in the last six to 12 months, we have also focused on markets outside London, having recently closed deals in Birmingham and Glasgow, to make sure we diversify our portfolio.

REC: Are you finding that prime German stock has become overvalued?

SV: We are probably at the peak now. Values have been so far sustained by low interest rates and liquidity in the market but any further rise from now onwards might create a situation of overvaluation. We are now being more opportunistic when sourcing deals in Germany. Rather than looking for deals actively, we support our existing international clients with their German acquisitions. If we do a couple of deals per year in Germany with a return that still makes sense, that’s fine.

REC: Is the bank starting to finance new asset classes or expand into new markets?

SV: We remain focused on offices, logistics and hotels while for retail we are closely watching the market and being very selective. It’s unlikely we will finance exotic assets like student housing or senior living, as we don’t have the expertise to underwrite debt for these operating assets. In terms of markets, we are continuously looking at new geographies, particularly markets providing healthy loan margins.

REC: What headwinds are you focused on in Europe?

SV: We are monitoring very closely the political developments in Italy to see how they could impact us there, as we have a small Italian loan portfolio and we are targeting up to €100 million in Italy per year. More generally, macropolitical developments within Europe and the ongoing trade war between the US and China is definitely something to watch, since it could impact investors’ appetite for new real estate deals. 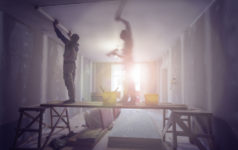