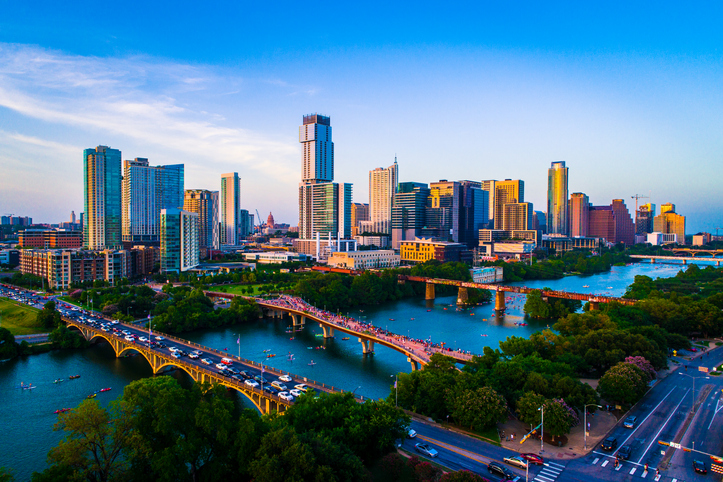 Austin’s high-flying multifamily finance market is being driven by alternative lenders, commercial banks, insurance companies and Fannie Mae and Freddie Mac – all of which are attracted to what they believe are solid, long-term growth fundamentals.

The Texas city – known for its “Keeping Austin Weird” slogan – epitomizes a widespread trend in the US of people, jobs and industry moving away from major markets in the Northeast and on the West Coast and into rising Sun Belt cities that offer a lower cost of living and more space. This trend only accelerated during the covid-19 pandemic as residents grew tired of life in big cities under strict lockdowns.

Between 2010 and 2019, the population of the Austin Metropolitan Statistical Area increased by 29.8 percent, making it the fastest-growing MSA in the nation, according to analysis by the Texas Chamber of Commerce. At 16.9 percent, the city has the largest share of new residents as a percentage of population of any US MSA after net migration of 355,902 over the past decade.

“The things that are driving these values are real rent growth based on real population growth, real wage growth, real job growth and so we think this momentum is going to continue”

Employment numbers have been equally strong. Even in 2020, at the height of the pandemic, Austin’s job growth only declined by 1 percent, more than 5 percentage points less than the national average. By comparison, job growth in New York shrank by 12.2 percent. Nationally, job growth declined by 6.1 percent. This net migration has heightened the need for apartment properties in Austin.

“Ten or 15 years ago, Austin was viewed as a tertiary city but that has changed over the past 10 years,” says Gee Kim, a principal at Turner Impact Capital, a private equity fund that invests in workforce housing, healthcare properties and charter schools.

Turner owns two properties in Austin totaling 750 units, a small portion of its 10,000-unit residential portfolio. But the firm is actively looking to keep expanding based on its analysis of the metrics driving the city’s growth, Kim says. “From a bottom-up perspective, we fairly formulaically scored every market across the country. Using those fundamental metrics, as well as some of those criteria that were unique to us and our strategy, Austin ended up ranking in the top 20.”

The company focuses on buying and renovating affordable, amenity-rich buildings in growing markets where there is a substantial gap between low-income and luxury housing, which dovetails with the firm’s strategy, Kim notes. “[Austin’s] population grew by almost 30 percent over the last 10 years, and it is forecast to grow by another double digits over the next five years. And along with the population growth, there has been very strong and robust employment growth, which you can see from tracking unemployment rates over time.”

Mesa West Capital, a real estate private equity fund that focuses on the debt markets, has been an active lender in Austin because it believes in the city’s growth story. The firm has originated $300 million of loans on seven multifamily properties in the city over the past two years, including a $40 million, five-year floating-rate loan to finance the acquisition of a 309-unit apartment complex in the Austin metro area.

The lender believes the market has strong credentials, although there are some near-term concerns that Austin may be a bit overheated. “Every time you look at a new trade, it’s at a basis that is significantly higher than where things were trading leading up to the pandemic just a short time ago. It can be hard to get comfortable with that kind of run up in value and not start to think that maybe things are starting to get a little overheated,” Brian Hirsh, vice-president at Mesa West, tells Real Estate Capital USA.

This run-up in pricing has also affected cap rates. “The challenges of investing in Austin right now are the historically low cap rates,” Hirsh says. “When you have this much equity chasing deals in a small market like Austin, the only natural way for cap rates to go is down. It’s anyone’s guess as to how long these ultra-low yields will stick around.”

There is also concern that over the near term, Austin’s current infrastructure may not be up to the challenge of supporting such expansion.

“It feels like opportunities for new development are starting to wane given some of the barriers to entry in the market,” Hirsh says. “Developable land sites have started to disappear, and it can be a tough market to get the entitlements necessary to make deals pencil. There are a lot of questions around infrastructure, and what is going to happen with traffic and the other infrastructure necessary for these new developments to work.”

Market participants who spoke to Real Estate Capital USA underscore that, as with any real estate investment, it is important to think longer term than the next year or two when discussing the prospects of the Austin metropolitan area.

“While cap rates are historically low on an absolute basis, they are accompanied by fairly strong fundamentals on the ground,” says Nickolay Bochilo, executive vice-president at Bell Partners, which acquired Lenox Boardwalk, a 339-unit apartment complex in Austin in August.

The company looks at the potential total return over a seven- to 10-year horizon on its acquisitions. “That would be a combination of the price that we’re paying up front and the cap rate we’re paying when we purchased the property as well as the expected growth over time,” Bochilo adds.

The city tends to attract young professionals, meaning the 20- to 35-year-old demographic is higher than many other metro areas. This favors a rental housing model, Bochilo adds. “The performance of the rental housing sector of multifamily in the US through the pandemic has been very strong, particularly compared to other real estate classes. There is also a natural hedge that comes with multifamily assets.”

Craig Bender, a managing director at ING Real Estate Finance, says the firm has not done a deal in Austin but has competed for assignments in the market. “Raleigh is another market that we like and there are clear signs of strength,” he says, adding that the lender is also looking at Charlotte, Atlanta and Richmond, Virginia.

“We have a lot of conviction around the long-term value position for multifamily,” Bender says. “We aren’t looking at things the same way that an equity investor does and as a lender we tend to look at the downside as well as the upside. We feel really good that these markets will hold up over the medium  to long term, even if they correct to a certain degree.”

Hirsh underscores that lending and investing in Austin is about following what is going on now, not what might happen, and that the growth the city is seeing is real.

“While values have been running up quickly, it’s not a purely speculative play – it’s happening,” Hirsh says. “The things that are driving these values are real rent growth based on real population growth, real wage growth, real job growth and so we think this momentum is going to continue.”