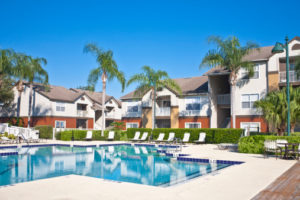 Founded in 2011, Waypoint owns and operates more than 20,000 units across 11 states in the Southeast and Southwest. While they occasionally acquire value-add properties, their main focus is on new multifamily developments funded with privately raised equity and conservative, simple debt structures.

While debt is still fairly easy to come by, low, simple leverage without mezzanine debt and preferred equity is a safer approach in the long run, according to Lawlor. And lenders are still eager to invest in their more cautious approach.

“We’re at the conservative end of the spectrum, we typically borrow about 60 percent of project cost,” he said. “There’s a tremendous amount of interest in providing construction financing at our leverage level.”

While Waypoint pays attention to inflation and debt market fluctuations, it tries to keep the focus on the fundamentals of its developments and not get too wrapped up in broader market turbulence.

Lawlor also noted that apartments have much shorter lease terms than other sectors like office, allowing for more flexibility to deal with inflationary pressures. “The old rule of thumb is inflation is good for commercial real estate because rents can go up. That’s even more so for apartments because we roll over the space every year. If you’re in an office building with a bunch of 20-year, fixed-rate leases, it is a very different conversation about inflation.”

Still, Waypoint is wary of planning future developments based on historic rent growth that probably won’t last long term. “We don’t underwrite to the rental of growth we’re seeing in our markets. In Tampa, Orlando, rental growth was anywhere from 12 to 22 percent last year. Now, that’s not sustainable. My model says 4 [percent].”

While Waypoint is still committed to expanding its Sunbelt footprint, opportunities to sell have been too good to pass up. Buyers have been eager to take properties off their hands even before they’ve shown successful leasing, according to Lawlor.

“The normal course historically is: build, lease and then sell. Now you can switch around and build and frequently sell before you lease without giving up much value, because that’s how competitive the market is for acquisitions.”

In addition to selling off 20 developed properties, Waypoint is actively trying to expand its portfolio as well. “We’ll close on, call it 15 deals, give or take about a billion dollars of total capitalization, all of which is already under contract, and, you know, scheduled to close,” Lawlor said. “That’s a pretty good year.”