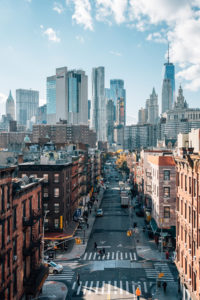 A confluence of rising interest rates, lower valuations and tepid occupancy levels are making it more difficult for New York City office owners to refinance maturing debt. And there is a lot of debt set to come due over the next year or two.

There is about $7.16 billion of New York office debt in commercial mortgage-backed securities deals maturing in 2022 – more than the past three years combined, according to data from Trepp, a New York-based analytics firm. While there is some liquidity for higher-quality assets, it is a different story for smaller, Class B assets.

“That is the big concern about replacing debt,” according to Rob Gilman, a partner and co-leader of the Real Estate Group at Anchin, a New York-based consultancy.

Gilman, who speaks frequently with clients who have near- and mid-term debt maturities on New York offices, says that most owners “think property values will go up during their hold and that they’ll be able to refinance for at least what their existing debt is. But with decreased valuations, the amount an owner can get might not be as much. With interest rates going up, debt service is more than it would have been a year ago.”

Gilman gives an illustrative example of a building valued at $50 million, which currently has a $35 million mortgage and a loan-to-value ratio of 75 percent. It’s more than likely that a lender would only offer about $30 million in proceeds on the same property today because of the impact that higher rates are having on valuations – and that can cause a significant headache for the owner.

“If the owner had to replace the $35 million, but could only get $30 million, the question becomes how to replace that $5 million,” Gilman says. “Does that mean working with a mezzanine lender or putting in more equity? It’s about talking to lenders eight, 12 months out and not just waiting for a week before the debt would be due.”

No such thing as free rent

Chris Varjan, a senior managing director in the New York office of brokerage Lee & Associates, has been seeing the impact of this scenario play out in his work with middle market office owners in the city. Varjan’s team is working on two office sales on behalf of long-term owners who could no longer make the numbers pencil to refinance debt on what had been solid, Class B space prior to the covid-19 pandemic.

Unlike the past, tenant improvement expenditures and free rent are not an answer.

“Each owner stemmed the tide against a bunch of pandemic vacancy, hoping leasing would come back and they’d re-tenant the building,” Varjan says. “This is a moment where they are going to have to plug the hole in the sinking ship and, with the debt markets where they are, that no longer works. These owners are having to sell because the costs to stabilize a building are substantially higher – an owner would have to spend $100 a foot to rent a space for $50, which means they don’t get the money back for two or three years.”

Many smaller landlords without large institutional funds as a backstop have largely burned through reserves. Although they were once well-capitalized, this has changed after two years of little or no cashflow and even negative carry.

“When these owners are looking to the debt markets, the increased interest rates and erosion of proceeds levels means there is an absence of lenders who are willing to write a loan for New York office product,” Varjan adds. “Even if you could replace the existing debt exactly, it will also cost more today than it did in the past.”

Varjan has observed the start of a shift away from the private equity and other institutional dollars that have controlled most of the office supply in New York for more than 20 years.

“The funds with three- to five-year capital are doing the calculations around what rents they can get and where they are going to exit and stepping back,” Varjan says. “When rates move every two or three months, it gets difficult to pin a cap rate on a building three or five years from now and even a little bit of deviation costs a lot of money. There is a big difference between a 4 percent and 5 percent cap rate – it is a 20 percent erosion in value, and there goes the profit.”

The sector that never sleeps

Despite the dislocation, market participants are loath to count New York out. There is a dichotomy between the city’s residential and office sectors, which are respectively waxing and waning. The city residential vacancy rate is at less than 2 percent as of the end of June, per second quarter data from Marcus & Millichap, whereas commensurate office availability rate is at 19.1 percent, according to a July Newmark report.

“You have a big split between the commercial and residential markets right now. Residential is thriving and everybody wants to live in the city, but no one wants to go to an office,” Gilman says. “I believe most lease renewals are with people who are taking less space than they did in the past because they don’t know what the future work model will be.”

At some point, this will be reconciled, says Bradley Tisdahl, a managing principal at New York-based consultancy Tenant Risk Assessment. But it is important to remember that full occupancy post-pandemic might not look the same as it did pre-pandemic.

“Even before the pandemic, full occupancy was not 100 percent of workers coming to their office every day,” Tisdahl adds.

“Full occupancy on any given day before the pandemic was 75 percent to 80 percent, and it is closer to 40 percent to 50 percent on any given weekday. But that could be halfway back or even more than halfway back, depending on how you define ‘fully back’ post-pandemic. It could be that we are more recovered than we think we are.”

Tenant Risk Assessment is also seeing more tenants who are looking for perhaps 30 percent to 35 percent smaller than they were in the past in terms of square footage.

“But tenants are either staying where they were in Class A buildings or moving from Class B to Class A properties,” Tisdahl says. “We’re finding tenants are saying to their teams, ‘Look, we’re embracing the flexible working model, and we want to have a more interesting and dynamic space for you to come into that emphasizes collaboration.’”

While things will continue to be wild and wooly in the interim, Varjan is taking a long-term view. “New York office will inevitably become a core food group again for lenders and investors. But what happens between then and now is TBD.

There is some re-zoning on the table in the city that could change the market and take some supply offline, which means the overall amount of office space will drop. But there is no question there will always be people who need to sit at a desk in New York. It’s just a matter of figuring out ‘how many’ and ‘when.’ Once that happens and the bleeding stops, lenders and investors will be comfortable with office again.”