As inflation continues to soar and interest rates ratchet up, the private real estate industry is seeing a bifurcation in the market: those assets that have liquidity, and those that do not.

“In a bull market, everything was priced the same and you had a convergence of pricing, with not so much differentiation between the best and the more average assets,” said Isabelle Scemama, global head of AXA IM Alts, the alternative investment arm of French insurer AXA Group. “What we are seeing today is that liquidity is there for some asset classes, but not all of them.”

Speaking at affiliate title PERE‘s 2022 Europe Summit in London last week, Scemama told delegates she expected rising interest rates to trigger repricing. Some borrowers, unable to make their higher debt payments, will be forced to sell “brown assets” at discounts that reflect the costs of making those properties green and more efficient, she explained.

“There will be some differentiation occurring thanks to this adjustment in the monetary policy,” Scemama added. “I think that will allow the more stranded assets to be priced at a level that will generate opportunities for investors.”

Martin Towns, deputy global head of real estate at M&G, also sees an opportunity to reposition older office buildings from brown to green. “I do think there’s a bit of repricing that needs to happen to begin with, because you’ve got that build cost point combined by the debt costs is going to be higher,” he said, speaking on a fund managers’ panel on day two of the conference.

“But if you get into that asset at the right price, if you’ve got the right strategy to rebound that asset and turn it into something occupiers want today, that’s a really interesting opportunity, when you take a six- to 12-month view,” he said.

But even among more favored property sectors such as logistics, “we are seeing assets being repriced there in the market and deals which might have been under offer at a 2.75 percent cap rate repricing at 3.25 percent,” Towns pointed out.

“I do think we’re at a very interesting point now, where a lot of us in the room still believe in those ongoing long-term trends,” he continued. “We’re just trying to figure out what’s the right price to pay to get into that trend right at the moment. Inevitably, in most parts of the market, we are going to see an element of repricing.”

Determining the right price will involve “really, really drilling down into the fundamentals of individual assets we’re buying and making sure we’re super-comfortable with the ability of those tenants to pay the rents, but also the ability of that particular asset submarket to support continued further rent growth,” he explained. “I think it’s going to become very, very nuanced as to the deals which you want to do right now versus the ones you might actually pass on.”

Paul Tebbit, head of EMEA real estate at BlackRock, expected “we’re likely to be living with higher inflation for longer,” with a number of factors including deglobalization, the transition to net-zero carbon, supply chain issues and food availability likely to keep inflation high for some time. He agreed that pricing investments “in this inflection point” will entail looking at individual properties, markets and strategies to decide on the right asset to hold.

“You may not get it perfectly right. It’s very, very hard to read at the moment,” Tebbit said. “It doesn’t seem that we’re necessarily going to see some disastrous drawdown at a similar level that we’re seeing in some public markets, but there is likely to be a repricing and we have to figure out how to be repricing in real time.” 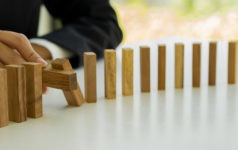