With New York home to several global banks, it is easy to forget the diversity within the US banking landscape. In real estate finance, Wall Street giants might write the biggest loans, but regional, state-focused and city-specific community banks are more active in certain areas of the market, including the financing of construction.

The largest banks have trillions of dollars of assets. However, data provider Yardi Matrix records more than 5,260 banks with less than $100 billion of assets in the US. For most of these banks, the figure is less than $10 billion. A 2018 report by Yardi Matrix showed that these banks had collectively committed $940 billion to commercial real estate as of 2017, up from $615 billion in 2005.

Data from ratings agency Fitch show that US banks with less than $100 billion of assets accounted for 55 percent of the country’s construction loans market in 2018, up from 41 percent in 2009. Multifamily market share increased from 36 percent to 52 percent in the same period. Fitch’s data also show that ‘mid-sized’ banks – with $10 billion-$100 billion of assets – reported average annual growth of 12 percent in commercial real estate lending over the past decade.

A $100 million loan to a construction project is a sizeable investment for a regional bank. Wall Street lenders would be more likely to seek risk-adjusted returns in other sectors than put effort into deploying what would be relatively small amounts by their standards.

Fitch associate director Johannes Moller adds that Wall Street banks’ appetite for real estate has reduced owing to greater competition from non-bank lenders, and that this has led the banks to seek yield elsewhere. He suggests that while the largest Wall Street banks might reserve only 5 percent of their balance sheet for commercial real estate lending, property loans might make up as much as 20 percent of smaller banks’ balance sheets. Moller insists that smaller banks’ appetite for real estate lending does not mean they have looser underwriting standards than the large banks. He argues that all lenders are focused on assets’ cashflows and demand similar collateral.

One regional US bank that has grown considerably since the financial crisis is Bank OZK, formerly Bank of the Ozarks, headquartered in Little Rock, Arkansas. Its total assets have rocketed from $3 billion in 2007 to $23 billion today. Its real estate division had $19.5 billion of total commitments as of 30 June. S&P Global Market Intelligence last year ranked it the seventh largest US bank in commercial real estate lending and development. In 2007, it had been ranked 63rd.

OZK chairman and chief executive George Gleason says its real estate strategy is nothing new, and that the bank has been active in the sector throughout the 40 years he has spent there. However, it grew its footprint in the south-eastern US by purchasing several failed banks after the financial crisis and expanded its construction lending business nationally.
Gleason attributes OZK’s growth to a focus on quality assets and an unwillingness to compromise loan terms. “If you have the best assets, there is a marked stability that keeps them from falling too far in value,” he says. Gleason adds that OZK is always the sole senior secured lender in a construction deal and has a large team of asset managers to monitor every project it funds.

“There’s no uncertainty with OZK,” says Jim Letchinger, founder and chief executive of JDL. “Any questions that arise, I know I will get a response from them in no more than seven days. There’s no bureaucracy, and as the developer I feel empowered to do my job.”
David Lichtenstein, chief executive of New York-based developer Lightstone Group, which has also borrowed from the bank, adds: “Even though OZK is now one of the largest lenders to construction, you can still pick up a phone and talk to somebody.” He adds that the personal touch is perhaps community banks’ greatest strength, as developers can become mired in bureaucracy when dealing with larger lenders.

Other regional banks active in property lending include San Francisco-based First Republic Bank and Oregon’s Umpqua Bank, both of which – according to their own data – have originated substantial volumes of commercial real estate loans in the past year.

Letchinger argues that the larger banks still have their place in US property finance, as they are the only organisations capable of handling the largest deals and have less expensive terms. However, he prefers dealing with smaller banks because of the value he says they place on individual deals: “I want to be important to our lender, because our lender is very important to us.”

Some observers might view smaller banks’ exposure to commercial real estate lending, and particularly to construction, as a potential risk. However, others argue that their knowledge of local markets makes them best placed to underwrite real estate projects in their backyards. Few expect region-, state- and city-focused banks to lose market share, precisely because of their local knowledge and connections. “There is still a hunger for income, and commercial real estate is now seen as a bedrock of fixed income,” says Lichtenstein.

Yet Fitch’s Moller does not believe the growth in real estate lending by smaller banks can continue at its current pace. He points out that loss rates and cap rates are at historic lows while property valuations remain high and that, in a “frothy” market, losses on commercial real estate loans will eventually come into line with historical averages: “The million-dollar question is when?”

OZK’s Gleason agrees. He argues that a focus on credit quality is a crucial “competitive advantage” in healthy economic conditions, just as it is in more challenging times. “We often find great opportunities when there is a disruption in the economy, just as we did in 2009 and 2010 when many in the industry retreated from lending.” 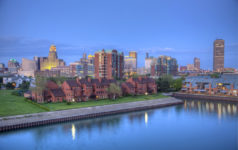