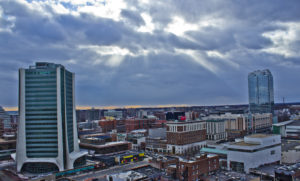 Persistent occupancy struggles in a Stamford, Connecticut office portfolio have led Fitch Ratings to downgrade one class of a 2014-vintage conduit deal with exposure to a loan on the property.

Stamford Office Plaza, a portfolio of Class A office buildings, makes up 7.9 percent of the remaining collateral in WFRBS 2014-C22, a commercial mortgage-backed securities deal completed almost 10 years ago by Wells Fargo Bank and RBS. Even prior to the covid-19 pandemic, the buildings struggled with occupancy levels, according to a Fitch report.

“The Stamford market is particularly weak, and this property has been struggling for a number of years,” Brooke Sutherland, a senior director at Fitch Ratings, told Real Estate Capital USA.

The loan is the second-largest remaining in the pool, with Fitch modeling a base case loss of 37 percent for the loan. The agency also completed additional analysis on the loan, concluding losses could reach 50 percent if recovery was slower than expected. It was that sensitivity that drove the downgrade of the deal’s D class.

The loan is secured by four Class A office buildings totaling 982,483 square feet, with Fitch first highlighting concerns over occupancy in 2018 when levels dropped from 83 percent to 63 percent. At the same time, the loan’s partial interest-only period ended in August 2019, which further dragged on performance.

Despite the problems with the loan, it has remained current, and Sutherland noted the downgrade was a relatively minor one. The loan is slated to mature in two years and Fitch is concerned about its ability to refinance.

“This was a pretty minor downgrade of one notch to a ‘B’ bond with an outlook negative,” he said. “This is definitely a case-by-case basis and not indicative of the entire CMBS universe.”

Still, there are additional concerns about the broader office sector.

“We expect to see more situations like this in some of the weaker markets where landlords have trouble filling large blocks of space,” Sutherland said. “This situation is somewhat unique and not unexpected as we have been monitoring this loan for a number of years and have been downgrading the bottom of the capital structure accordingly.”