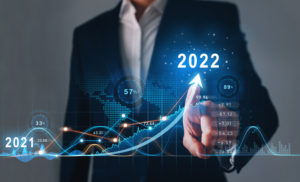 A new survey from law firm DLA Piper shows continued heightened optimism for the commercial real estate market, citing a bullish view that is partly fueled by an abundance of capital.

The London-based firm’s 2022 Global Real Estate Annual State of the Market Survey found that 73 percent of respondents remains bullish about the commercial real estate market, roughly the same level as in 2021. But more respondents reported a higher level of confidence over the next 12 months. “The increased optimism relative to 2020, when just 21 percent expected a bull market, is significant,” the report stated.

More than half of the survey’s respondents cited increased activity as their primary source of confidence – up 17 percentage points from last year – with abundant capital looking to invest in commercial real estate said to be driving the market.

Other sources of confidence include strong fundamentals for most asset classes, with the most noteworthy finding being an anticipated rebound for the retail sector in 2022.

Meanwhile, a large share of the survey’s respondents ranked logistics, warehousing and cold storage as the most attractive risk-adjusted investment opportunity in the US for investors over the next 12 months.

An even split on economic confidence

The US GDP will increase in the coming year, said 45 percent of the survey respondents, while an equal amount think it will go down and the remaining respondents expect no change.

Goldman Sachs expects GDP growth to slow to 3.2 percent this year, while the US Federal Reserve’s April forecast projects that US GDP growth will average 2.8 percent this year – indicating that it could still grow but is normalizing after significant multi-year increases.

In tandem, interest rate increases and inflation were listed among the top concerns with nearly all respondents believing interest rates will increase over the next 12 months.

Austin leads the pack in this regard, because of residents and new CRE opportunities.

“Similar to Austin, other Sun Belt cities like Raleigh-Durham, Miami, Phoenix and Nashville all saw large increases in projected investments since 2019, while traditionally large hubs like New York, Los Angeles, Silicon Valley and San Francisco have fallen in their investor appeal,” the report stated.

DLA Piper’s largest deal volume was in acquisitions and dispositions. This alongside developments, joint ventures, leasing and real estate finance rounded out the top five areas for the firm in 2021.