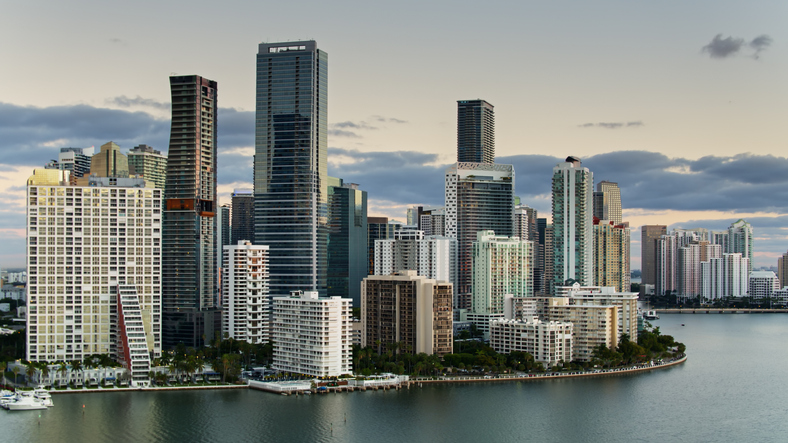 The burgeoning popularity of the southern Florida region as a choice location for employers and their workers is creating new lending opportunities beyond the hospitality fixtures typical to Miami and its surrounding neighborhoods.

What was once a vacation hotspot deriving a significant portion of its economic value from tourism is now a top-tier metropolitan area that is nearing or at parity with other US gateway cities. For Miami especially, the increased pace in relocations has provided stability – and rapidly rising rents – in a locale that historically has seen more volatility as market cycles waxed and waned.

Amy Julian, senior vice president in the debt and structured finance division of CBRE’s capital markets group, says that, despite volatility and uncertainty across US lending markets today, fundamentals remain strong in southern Florida and Miami, with vacancy tight across asset classes, and rent growth occurring across the spectrum.

“Multifamily and industrial are strong in most major submarkets throughout the country, but I think office is difficult in a lot of markets,” Julian says. “But there’s somewhat of a safe haven in South Florida, and when you’re going to lend or invest in office, why not choose a place where the fundamentals are tightening, people are working, people are in their offices.”

Cain is one of many commercial real estate debt managers that have established and subsequently expanded a lending presence in the greater Miami area in recent years. The New York-based investment firm entered the area in 2016 and currently holds five assets in Miami, including 830 Brickell, a 54-story tower comprising 600,000 square feet of Class A office space atop ground floor luxury retail.

Matthew Rosenfeld, senior vice president and head of US debt at Cain, says the firm saw a disconnect with the product being offered up during the 2016 foray into southern Florida where condominiums and multifamily were great but there was a vacuum among office assets. “The only amenity in an office building in Miami at the time was the ATM in the lobby,” he says.

There are certain neighborhoods within the city that are also seeing interest from tenants rise. “Neighborhoods growth as seen in Brickell, Design District, Midtown and Wynwood are why we find Miami to be a compelling market long term,” Oates says. “If you look back 10-15 years, Miami was a leisure destination. It was perceived as a place to visit, not necessarily to work and live, but since the early- to mid-2000s – before the global financial crisis – there’s just been a ton of development and density in mainland Miami, away from the beach and typical tourism destinations.”

Monte Greenberg, a senior member of Colliers’ debt and equity services group, says Wynwood especially has experienced accelerated growth as a result of successful rezoning measures driven by property owners in the area.

Greenberg cites The Gateway, a 12-story high-rise in Wynwood, as the first office to find success in the neighborhood and expects Wynwood25 – a creative-geared apartment asset – alongside other multifamily developments to follow suit as they come online.

The increase in high-grade office tenants and headquartered employers in Miami has also been a boon for the greater metro area. Spotify, PwC and New York-based hedge fund Schonfeld represent a fraction of the businesses that have increased their personal office leasing in southern Florida, as an example.

Recent lending activity in southern Florida features financiers such as Square Mile Capital, 3650 REIT and Churchill Real Estate, which all issued loans at or above $100 million between June and July 2022.

US commercial real estate bank stalwarts such as JPMorgan and Wells Fargo remain active in the locale, too. In May this year, the duo of lenders issued a $1 billion two-year, interest-only floating rate loan with a 2.6 interest rate to the Taubman Group for the revitalization of Miami’s Dolphin Mall, according to Traded, a real estate transactions data provider.
Toby Cobb, co-founder and managing partner of Miami-based 3650 REIT, says his firm has tracked strong rent growth in the Florida market among other parts of the US South, such as Texas and the Tennessee Valley. He notes, however, it would be naive for market participants to expect this kind of growth to continue.

Miami is not immune to constraints on the supply of office or multifamily asset availability akin to the rest of the US. The broader region is affected by interest rate hikes and inflation similarly to other Sunbelt metro areas.

“This rate environment gives us less visibility on exits, and cap rates are starting to move up a little bit, but not a lot on the multifamily side,” Benslimane says. “We are less active on large multifamily projects, but we’ve been pretty active investing in value-add office projects.”

Multifamily specifically is tough to navigate as a lender, and Benslimane notes there has not been enough supply of apartments despite the new construction taking place. “When you’re looking at financing new acquisitions, it’s hard today – especially in this rate environment – to make sense of a sponsor’s business plans when they’re eyeing an exit two or three years from now at a sub-4 percent cap rate,” he says.

Benslimane says Leste is bullish on the southern Florida market as a whole, but is watchful of the new office, multifamily and condominium supply coming online. “It may be a little difficult getting that kind of visibility, and especially considering a lot of sponsors are underwriting rental rates or sales prices that are higher than today’s market.”

Shannon Rex, executive managing director of Colliers’ debt and equity finance group in southern Florida, says that, while rates have increased and created some pause, they are still historically low and there is room for great deals still among the increased waves of competition. “It’s not necessarily a straight line,” he says. “We look at past performance and how well things are performing in the market in general, as well as the property specifically and base underwriting off that.”

Rex says the southern Florida market has matured over the last decade and become more service-oriented. He notes hedge funds, private equity managers and traditional asset managers have all set up shop in the area in some form, whether it is Carl Icahn’s relocation to Miami or Goldman Sachs’ new local base in Palm Beach.

While high-grade tenants do not beget immunity to market volatility, having a more sustainable economic base does provide some additional stability when evaluating the lending viability of Miami and southern Florida generally. As of May, unemployment figures across Broward, Miami-Dade and Palm Beach counties all clocked in nearly a full percentage point below the national average of 3.4 percent, according to the US Bureau of Labor Statistics.