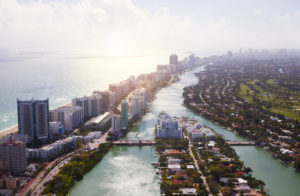 Bank OZK, an active lender across all sectors in 2022, has kicked up 2023 with the origination of a $277 million construction finance package for a new Miami Beach luxury hotel and condominium tower.

The Little Rock, Arkansas-based financier supplied the capital to OKO Group and Access Industries, which announced on January 10 they would be pairing up to develop an 18-story apartment tower along the coastline. This would coincide with their redevelopment of the former Versailles hotel next door.

OZK had previously funded a $34.8 million loan in 2020 to help finance the project with the January installment consisting of an additional $242 million of construction capital. The project is slated for completion in 2024. New York-based advisory Newmark arranged the deal with Dustin Stolly and Jordan Roeschlaub representing the New York-based advisory.

OZK’s latest loan arrived on the heels of the Commercial Real Estate Finance Council’s annual January conference in Miami Beach – which coincidentally was taking place at the Loews Hotel a mile-and-a-half North of the OKO and Access site at 3425 Collins Avenue.

Sentiment at the conference was tilted toward a down year for new originations for acquisitions because of the increased interest rate environment, though financing for construction loans still carries a more optimistic tone.

With some major balance-sheet bank lenders on the sidelines as well, the lending pool has thinned and in turn opened the door for any active market participants to pick up some near-term market share among those sponsors and borrowers looking to put capital to use.

In the second half of 2022, OZK kept debt capital flowing into new opportunities and development projects. The bank recorded multiple loans in excess of $150 million from August 2022 onward, including tandem deals with Square Mile Capital, Barings and Lionheart Strategic Management as well as solo deals like OZK’s $176 million loan for the development of 420 Carroll Street in Brooklyn’s Gowanus neighborhood.