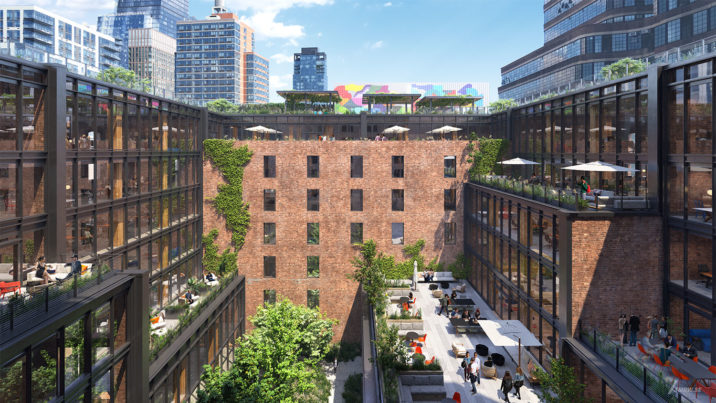 New York’s Terminal Warehouse, a massive full-block property overlooking the Hudson River on 11th Avenue between 27th and 28th Streets, is getting ready for its next act with the help of a $1.25 billion loan from a group led by Blackstone and Oaktree Capital Group.

Owners L&L Holding Corp and Columbia Property Trust obtained the loan in July as part of a plan to reimagine the 1.2 million-square-foot former railroad terminal as a modern office and retail property.

The redevelopment will showcase the building’s red brick and iron façade, arched windows and centuries-old timber. “The creative firms that are becoming the dominant players in the New York market want to be next to a brick column or wood that’s more than 500 years old because that kind of authenticity, that’s part of their values,” Andrew Staniforth, a vice-president at L&L Holding Corp, tells Real Estate Capital USA.

1891: Terminal Warehouse opens its doors
1984: The building’s tunnels are converted into the Tunnel
Nightclub, which closes in 2001
2019: L&L Holding Corp and Normandy Properties acquire the
building for $880 million
2021: L&L Holding Corp and Columbia Property Trust obtain a
$1.25 billion financing package to redevelop the property

L&L and Normandy Real Estate, acquired by Columbia Property Trust in 2020, took control of the building at 261 11th Avenue in 2018 with the understanding that the property – then used mainly for warehouse and self-storage – needed a lot of work.

Plans include reconfiguring the inside of the building to create a series of double-height interior spaces, cutting out roughly 200,000 square feet from the center to bring in additional light and air, and adding six new stories of office space with floor-to-ceiling windows overlooking the Hudson River.

The financing shows that, despite lender squeamishness around office and retail, there is ample capital for landmark construction projects. CBRE arranged the financing with Blackstone’s Real Estate Debt Strategies business and Oaktree, who were joined by KKR, Paramount Group and Goldman Sachs.

“We were biting our nails about how the market would receive what we were doing because we were circulating the books at the height of the pandemic,” Staniforth says. “In the papers, you were reading that New York is dead, that office was dead.”

But after numerous covid-safe tours, the partners found prospective lenders liked the plan – and really liked the fact that space would be delivered in 2023. Looking at the bigger picture, the financing is a window into New York’s next chapter, Staniforth says. “The selection came down to finding the lenders who truly understood what we were trying to do and be a partner. We had to make sure our values were aligned on what we saw for the building and what we saw New York becoming, with a flight to quality and a flight to authenticity.”