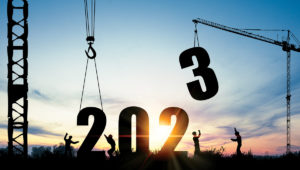 US commercial real estate transaction and lending volume is ending the year on a down note, with lower than expected investment sales activity and the strong potential for distress arising in 2023, according to a fourth quarter report from data and analytics provider MSCI.

“Activity for the year to date [through the end of November] stands $3.3 billion lower than the pace set through November of last year. Normally, that sort of gap might not seem like much, but the activity for the year to date is only that healthy because of stronger trends earlier in 2022,” wrote Jim Costello, chief economist, real assets research.

The drop in transaction activity stemmed from a gap between buyer and seller expectations as well as a slowdown in lending activity. “Deal volume fell as potential buyers were less willing to step up to the reservation prices at which owners were willing to sell assets,” Costello noted. “This gap can be interpreted as the price adjustment necessary to return investment activity to normal levels.”

MSCI tracked a significant rise in commercial mortgage rates, with Costello noting the commercial market responded more slowly than the residential market to the Federal Reserve’s push to increase rates.

The firm also tracked a drop in LTVs through 2022, a phenomenon that was seen across property sectors. “When lenders are only willing to do a deal at a lower LTV than in the past, the change implies that they consider the value portion of that ratio to be more at risk than in the past,” Costello wrote. He noted that LTVs fell most significantly in the apartment sector, where LTVs dropped by 64 percent in January to 61 percent for loans originated in November.

The lack of distress in part stems from excess liquidity from the Federal Reserve during the pandemic, which meant investors were able to avoid taking losses. This could change, however. “Is the market due for a wave of distressed asset sales in 2023 as loans mature? With credit much more expensive in the current market than in the previous two years, investments completed in the period of easy credit may not work as well,” Costello said.