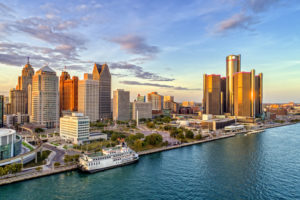 Although a soft market for hospitality lending due to the coronavirus pandemic has reduced the availability of construction financing for hotels, Steven Buchwald, a senior managing director at advisory Mission Capital Debt & Equity Advisors, said recent investments from Ford Motors in the city and the established reputation of Detroit’s Corktown neighborhood present the potential for growth in the Motor City hotel sector. Mission Capital, which arranged the transaction, declined to disclose the lender.

There is also a supply-demand story for the planned 227-room Godfrey Hotel, which will include a 9,000-square-foot conference center.

The planned Godfrey Hotel is in an opportunity zone close to the MGM Grand Detroit, the city’s downtown and the US-Canada border via the Ambassador Bridge. The site is also part of a three-phase project that will include two multifamily structures to be developed by Oxford and Hunter Pasteur.

Jordan Ray, senior managing director at Mission Capital Debt & Equity, said lenders are eager to get in on the action now that Ford Motors has committed to revamping the former Michigan Central Station building in the same neighborhood. That deal, according to Ford, will add approximately 5,000 more jobs to Corktown and Detroit.

While the team came close to structuring financing for the project at the very beginning of the pandemic, Ray said the deal fell through in April 2020. However, one year later and 60 days after Mission Capital began marketing the project again, Oxford Capital and Hunter Pasteur finally lined up financing and the partners broke ground at the site on Michigan Avenue between 8th and 9th streets in September.

“There was a thin market for hotel construction lending nationally in general, but the fact that we got it done in downtown Detroit speaks to the project,” Ray said. “We sourced several interesting structures, and some were non-conventional – lower-leverage banks, ground-lease financing. However, the lender who ended up closing gave us a more conventional senior and subordinate structure, which is what our client wanted.”

When asked about pricing for hospitality in a city like Detroit, Ray said pricing was not much wider than it would have been if this was a construction loan for similar hospitality in Miami or New York right now.

Oxford and Hunter Pasteur are finalizing plans to launch an adjacent apartment complex, according to a press release.